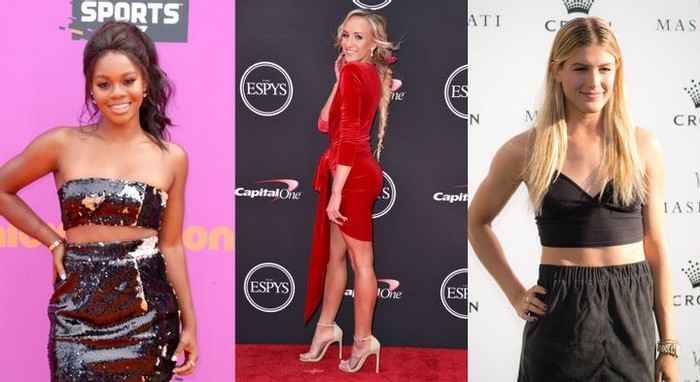 Most times, when we see our favorite athletes, they’re donning the usual tracksuit but a lot of them sure know how to glam things up when the occasion calls for it, say like a medal or award to be won.

And there’s always something to be won somewhere, the red carpet inclusive.

A great many of the gymnasts, tennis players, wrestlers and soccer players we like have carved their names in the pop culture Hall of Fame because of their remarkable feats. As a result, they are present at several award ceremonies, premieres and red carpet events. They undoubtedly look like the Hollywood elite.

Lovers of figure skating surely are familiar with the name, Ashley Wagner. The athlete has bagged a number of first-place medals at the international level of figure skating. At the 2014 Winter Olympics that took place in Sochi, she won a bronze medal for the American team.

A year after the Olympics, Wagner was given the chance to man the Nickelodeon Kids “Choice Sports Awards as one of the presenters and she acted accordingly as was required of her. She showed up in a short pink top over a vibrant multi-colored skirt; a perfect match with her personality!

Alex Morgan built a reputation as one of the US women’s national football team players at the FIFA Women’s Word Cup in 2019.

Winning the world cup brought Morgan to limelight as one of her nation’s heroes and thus she received an invitation to attend the MTV Video Music Award after a few weeks. She showed up looking elegant in a radiant pink dress with a large bow.

If you’re a devoted fan of WWE, you would be familiar with the name, Becky Lynch, the current Raw champion. Her wrestling career started in 2002 in her country of origin, Ireland. However, it wasn’t until after 10 years that she got signed in to WWE and becoming a renowned fighter.

Lynch took part in the ACM Awards with other WWE celebrities and she took her A-game with her. This star stormed the red carpet donning a two-piece and glowing more than most of the superstars who were in attendance

Maria Sharapova is a well-renowned tennis player, one of the best in her generation having scored the #1 five times in the WTA. She is the only player to have won the four Grand Slams for Russia. She also has Olympic medals to her name.

For more than 15 years, the limelight has been on Sharapova as she has been buddies with the Hollywood elite. She has accompanied Vanity Fair stars to the Oscars a number of times. In this photo, she’s in attendance in the year 2019, sporting a ruffled dress and Stuart Weitzman heels.

Time magazine has named Jennie Finch history’s most popular softball player and with good reason too. In 2004, she led the US national softball team to victory winning a gold medal ad in 2008, they brought Home a silver medal, both at the Olympic Games. two years after, she went into retirement.

After retiring, she didn’t take a back seat from the spotlight as she was in attendance at the 2014 ESPY Awards. She donned a gorgeous navy blue dress with a playful print and stick sandals.

Caroline Woziniacki is the first player from a Scandinavian country to top the list in the women’s ranking. She has 30 WTA single player titles to her name through the years. After the 2020 Australia Open, she openly declared her decision to retire.

After attaining stardom as a tennis player, Woziniacki received invitations to several upper crust events, including the Met Gala in 2016. She attended wearing a stunning dress by Prabal Gurung with her pretty blond hair falling on her shoulders.

Anastasia Yankova was inspired to become a fighter by an obsession she’d had since childhood. The movie, Xena: Warrior Princess, inspired her to become skilled in mixed martial arts as a teenager. She also participated in the Flyweight division of Bellator MMA.

It wasn’t long before Yankova got a sponsorship from Nike and began to attend elite gatherings. In this photo, she’s in attendance at the 10th Annual Guys Choice Awards organized by Spice TV. She dons an cute little monkey playsuit. This shows off her wonderful tattoos.

If you’re trying to recall why Candace Parker’s last name rings a bell, it’s because her elder brother is Anthony Parker, the NBA player. She took after him and made huge success in the WNBA team known as the Los Angeles Sparks. She has also won two gold medals for the United States at the Olympics.

Parker attends the NBA Awards frequently. She shocked everyone at the 2017 event when she rocked the red carpet in a regal black gown with a pair of velvety sandals and a choker to match.

US history has recorded Nastia Liukin as one of the most successful artistic gymnast. Nastia has won five medals, all in the year 2008. At the Summer Games in Beijing, she won three silver medals and one bronze medal.

After her retirement, Liukin stayed in the spotlight, her physique still intact. One of her unforgettable looks was at the ESPY 2018 where she turned up in a pretty short dress sporting a plunging neckline. The best part were the flowers in her hair.

Anastasia Ashley decided to try out surfing when she was just 5 years old and she developed a great love for the sport immediately. She took a head plunge into it for the long term and began winning big titles as a teenager.

In 2014, Ashley caught the attention of The Sports Illustrated and they put her in their May issue that same year. They continued to work together and in 2016, she alongside other stars attended the 50 Fashionable NYC event. She didn’t fail to impress in her little black dress.

Barbara Blank is popular especially amongst WWE fans but with the stage name of “Kelly Kelly”. In 2011, she won the WWE Divas championship but her reign lasted for four months as she chose to go into retirement in 2012. However, it didn’t deter her from making an appearance on Raw Reunion and bagging the title of first female WWE Championship winner.

Blank added TV fame to her belt as well by taking part in reality shows, specifically WAGS. In this photo, she’s wearing a simple and stunning red dress to the US Network Approved Characters Awards.

Majority of those who know Urszula associate her with her elder sister, Agnieszka Radwanska, a skilled Polish tennis player. She attained success as a junior player when she won the 2007 women’s Wimbledon matches.

Asides her impressive success as a tennis player, Radwanska revealed her surprisingly wonderful personal style. This elegant emerald dress could easily score her a spot on the best dressed list of any major red carpet gathering.